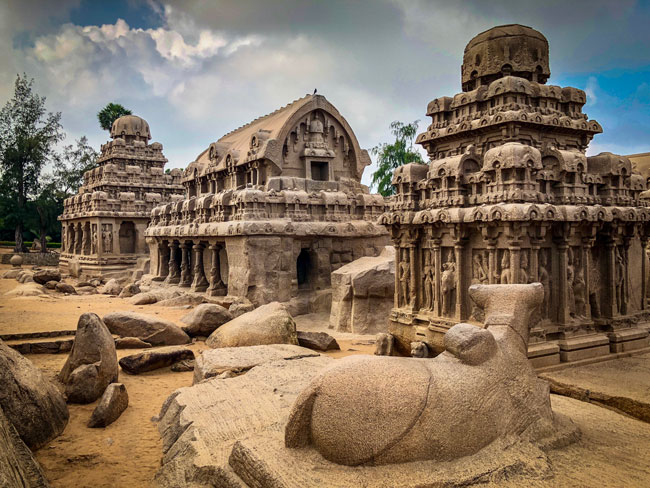 The Mamallapuram town is located on the Coromandel Coast of Bay of Bengal in the Chengalpattu district of Indian state, Tamil Nadu. The little town has an elevation of 39ft and the official language is Tamil. The town of Mahabalipuram also called as Mamallapuram or Mamallapattana & another meaning is great power or Seven Pagodas, which stood on the Shore of Mahabalipuram Beach since the time of Marco Polo. The town has collection of 40 ancient monuments from the time of Mahabharata and depicts Shaivism, Shaktism and Vaishnavism and some rock cut Hindu temples which are mostly dedicated to lord Shiva. One of the key attractions is Ganges or Arjuna’s Penance (one of the largest open-air rock relief in the world) and this small town has been declared as a UNESCO World Heritage Site and is managed by Archaeological Survey of India (ASI). Being a UNESCO site, tourism and hospitality industry forms the back bone of town’s economy.

Mahabalipuram has a tropical wet and dry climate it means summers are dominant in the town. However, being in close proximity to Bay of Bengal, the town also sees much variation in its average temperature every year. The ideal time to visit this town is during the winters, i.e. from the months of November to February, during this time, days are pleasant & cool while and perfect for sightseeing and exploration. Apart from the sight-seeing and historical exploration, the government of the town organizes “Fine Arts Festival” in the month of December – January, which includes music, dance, mimicry performances by local artists and some other famous personalities also to promote the culture and heritage of India.

Mahabalipuram is well connected by road with major cities of Tamil Nadu like Chennai, Pondicherry, Chengalpattu, Kanchipuram and state and private buses ply at regular & frequent from these cities to the town of Mahabalipuram. From Chengalpattu bus stand to Mahabalipuram the bus ticket is Rs. 21 per head.

Chennai international airport is closest to the town which is located 58 kms away. There are majority of the stations that serves non-stop flights to Chennai and from there you can board on town bus, sharing taxi or even pre-booked cabs to your desired destination. The average flight charge to Chennai is around Rs. 2545 per head.