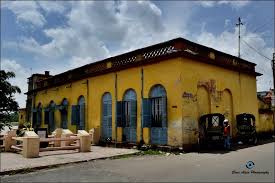 The small town in Hooghly district of West Bengal which can be a part of Kolkata is the small yet significant Chandannagar. It has the best history which went as planned, unique yet formidable of all. This town is a mixture of various national and foreign influences, creating the best history which gives a look in the past for tourists.

Although Chandannagar doesn’t have its own airport, still is nicely connected to other cities via rail, road. Given below are the details about how to reach Chandannagar :

By flight : Chandannagar does not have its own airport, so the nearest airport is the Kolkata Airport. This airport is well connected to prominent cities and holds regular flights from different cities which makes it easily accessible. Just a drive for one and half hours in taxis will reach you to the town.

By road : Chandannagar is nicely connected to other cities by roads. State government buses and private buses run across the towns connecting them. This mode of transport is a very good choice but should be avoided during monsoon as heavy rainfall is risky.

By rail : The city has its own rail station which is mostly 1 km away from the city. This station is well connected to Howrah station, also trains from different states take a pause there. Trains are a convenient way to reach Chandannagar. Taxis to reach hotels or roan the city are easily available outside of the rail station.

So, reaching Chandannagar is not a difficult process. Be ready with your luggage to reach here and enjoy the beauty of the city.

The weather of Chandannagar is not extreme, but summer is not suitable because of heat and monsoons for heavy rainfall. Given below are some more information about the seasons in Chandannagar :

Summer : The heat in summers is high with temperatures ranging 24 to 35°C and humidity makes tourists uncomfortable. Evenings are good to step out, but due to high heat generally very low to no tourists visit during summer.

Monsoon : Showers in June start the monsoons which gives relief from hot summer. But still, heavy rainfall restricts tourists from enjoying the city fully. The weather is sure humid but for nature lovers, the heavy monsoon can be a treat to their eyes.

Winter : Winter arrives nearly from October and brings relief to tourists and lets them enjoy the city to its fullest. This season brings more tourists than summer or monsoon. People can now step out on chilly nights and experience wonderful sightseeing.