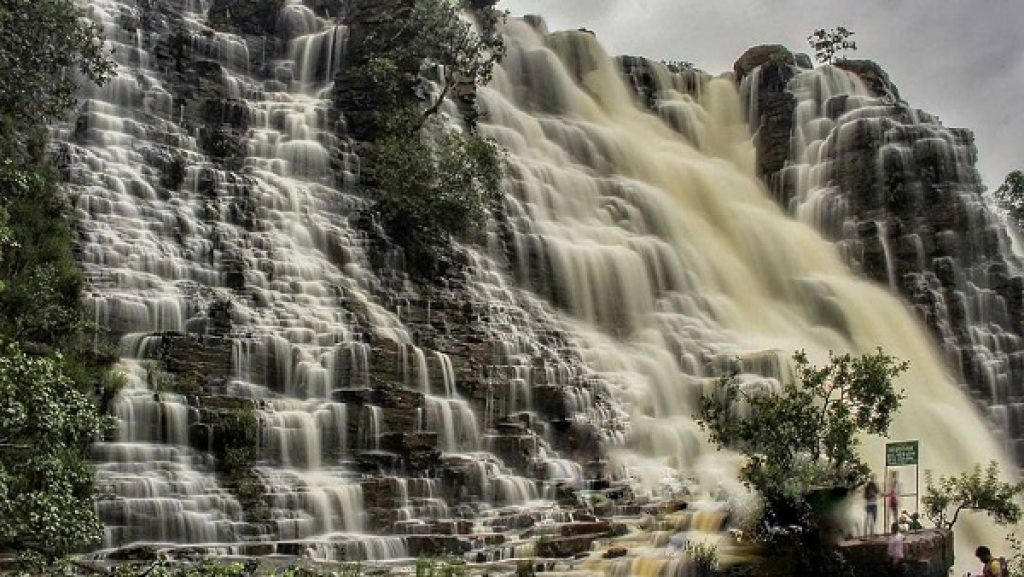 A Teeratgarh or Tiratgarh waterfall is located near jagdalpur at Kanger Valley in Bastar district in the Indian state of Chhattisgarh. This is a block type waterfall at Kanger River. The place is surrounded by diverse wildlife, dense vegetation and because of its block nature, it seems very photogenic. The water has milky appearance and plunging of water waves on stones creates melody in air.

Teeratgarh Waterfall is all season visitors spot. October to March is considered as ideal time to visit this place but waterfalls are more frequently visited spot in summers. Though the temperature in summers is high but lush greenery and calming environment maintains the overall temperature of the area.

It is a limestone cave and vertical fissure is the entry to the caves. Caves are considered as religious site according to Hindu Mythology and tourists here worships speleothem in one of the tunnels. This is one of the most biologically explored caves of India.

It is built in mountains by cutting rocks. People visits this cave during day time, especially for is architecture and it is been said that the water from little fountains taste sweeter than usual which has been considered as blessings of Lord Shiva due to its name “Kailash”.

At first you have to reach Kanger Ghati National Park by city bus from jagdalpur city. Then from there you have to keep a track on forests and hilly terrains which will lead you to your destination.

You have to take a train to Jagdalpur city; there are very frequent trains available to Jgdalpur from Vishakapatnam, Ranchi, Kota, Ratlam, Mumbai, Bangalore and more. From station you have to take a cab to Teeratgarh falls which is approximately distanced at 30kms.

The nearest serving airport is Swami Vivekananda International Airport in the capital city of the state, Raipur. The airport is 320kms away from Kanger Ghati and you can opt for city bus, sharing cabs and even pre-booked taxis to reach there.