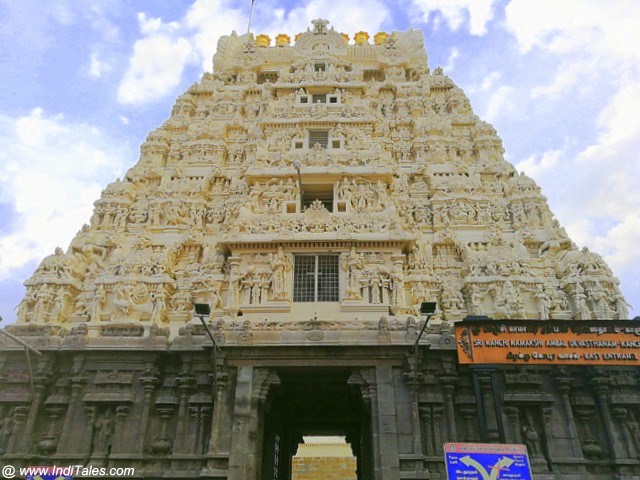 Kanchipuram is a Tamil word which is formed by combining two words; Kanchi means Brahma & puram means residential place. The city of Kanchipuram is also pronounced as Kancheepuram or Kanchi and is situated on the banks of the Vegavathy River with total land cover of 11.605 km sq. The city is an administrative headquarters of Kanchipuram district & in ancient times, used to be centre for advanced studies of Jainism, Buddhism & Hinduism (the three most prevailing cultures in the world). The district of Kanchipuram is one of the seven Tirth (pilgrimage) sites, and harbors some of the major Hindu temples in the country that are dedicated to Lord Shiva. In that out of the 108 temples of god Vishnu found in the state, 15 are located in Kanchipuram itself.
Apart from spiritual side, the place is also known for Kanchipuram Sarees (which is basically Silk Sarees). The silk weaving, sericulture & handloom industries have taken a boom in year 2008 and since then it became a major source of livelihood for the domiciles there. For further development, Kanchipuram was chosen as one of the heritage cities for HRIDAY – Heritage City Development and Augmentation Yojana scheme of Government of India.

The climate of Tamil Nadu in general is not very cold, so in Kanchipuram you can experience hot & humid weather. The ideal time to plan a trip to Kanchipuram is from March to October and if you want to enjoy monsoon (June to September) which brings heavy pouring rains in the area coupled with cool breeze.

One of the best ways to reach Kanchipuram is by road. The NH 04 (Chennai – Bangalore) passes through the outskirts of the city. Daily bus service is available by Tamil Nadu State Transport Corporation (TNSTC) and some private buses to Chennai, Bangalore, Villupuram, Tirupathi, Thiruthani, Tiruvannamalai, Vellore, Salem, Coimbatore, Tindivanam, and Pondicherry.
If you are an outsider, the easiest way to approach Kanchipuram is from Chennai. There are two major bus routes to Chennai; first is via Poonamallee and second is via Tambaram. Majority of interstate local buses operates from Poonamallee bus stand.

The city has its own rail-head known as Kanchipuram railway station; there are daily trains to Tirupathi & Pondicherry, weekly trains to Chennai, Bangalore & Madurai. From the rail-head there are plenty of local transportation options available but the distance between the railway station and the city area is less than 4kms. and one can easily cover that on footsteps only. The train ticket price from Chennai to Kanchipuram is Rs. 500 per person.

The nearest aerodrome serving to the town is Chennai international airport located about 72kms. away from the city area.  As we all know, Chennai has great flight connectivity with all other parts of India. From airport you can always take a bus, taxi or pre-booked cabs. From any major city of India, flight to Chennai will cost you between Rs. 2500 to Rs. 5239 per head.