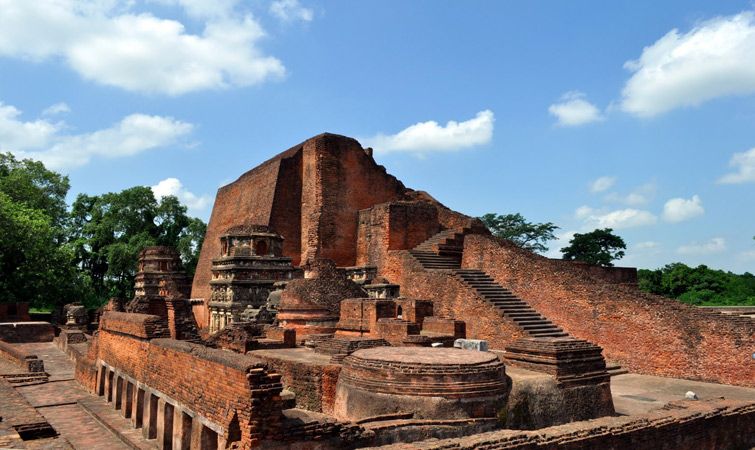 Nalanda is an ancient district in the eastern state of Bihar, India. It is also one of the thirty-eight districts of Bihar. It is now considered a UNESCO World Heritage Site. The official name is Archeological Site of Nalanda Mahavihara. The prime center of attraction is Nalanda International University. The scholars were mostly from China, Tibet, Indonesia, Persia, Japan, Korea, and Turkey. Its total land area is 2367 Km2 and its population density is about 1200/km 2. The district is popularly known as Biharsharif. Nalanda was destroyed thrice by Bakhtiyar Khalji but built only twice. The present-day picture of the university portrays the remainder of the third attack. The district Nalanda is also a revered Buddhist monastery and thousands of monks were burnt alive in the library when Bakhtiyar Khalji came to looted the university and set the university library on fire. The unique and devout attraction is Chhath Puja. It is believed that Lord Mahavira spent 14 rainy seasons here and Gautam Buddha delivered lectures under a Mango tree and gave his one of the most important adherent i.e. Shariputra. The best time to explore is October to March as the minimum temperature range is 4 to 8 degree Celsius and maximum temperature range is 28 to 40 degrees Celsius.

By Road:-
Nalanda is well connected by road. State buses run from Patna, Bodh Gaya, Rajgir to Nalanda. The buses runs by the state rate card.

By Railways:-
The Rajgir Railway Station is 12kms away from the main city land of Nalanda. From there the taxi or auto-rickshaw facility is available 24/7 at their local price. The station is well connected with the cities of the state. The passenger train runs frequently from Patna Junction, Islampur, and Gaya. The trains are also available from Delhi, Kolkata, and Indore. The average charge per person is around 800 to 1500

By Airways:- The Jayprakash Narayan International Airport in Patna is the closest to Nalanda at a distance of 78kms. Well, the distance is easily covered by a taxi. The airport is well connected by Indian cities like Delhi, Jaipur, Kolkata, Bangalore, and Bombay. The average charge per person is 3k to 5k.

One thought on “NALANDA, BIHAR”