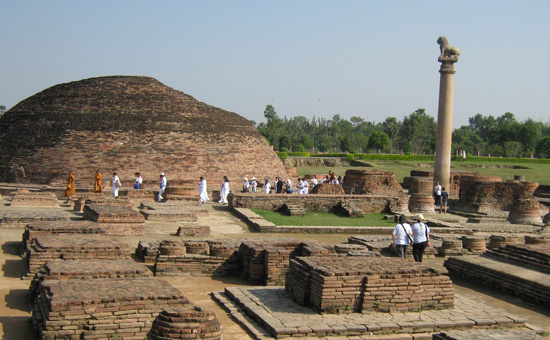 Vaishali is now considered an important archeological site and it is believed to be among the first republic around 6 the Century. It is a district of Bihar, India. Its total area is 2036 km 2. The present-day name of Vaishali is “Vesali”. The ancient name of the city is derived from its ruler named Vishal. The city has witnessed some of the most important historic events. It is believed that Lord Buddha has visited this place 3 times and delivered his last sermon at Vaishali and announced his Nirvana here. Vesali is also the birthplace of Lord Mahavira. So, this place is an important pilgrimage site for 2 major minority religions i.e. Jainism and Buddhism. The locals here speak Bajjika or commonly known as Bajjikanchal. But there are other languages like Hindi, Urdu, and Maithili frequently spoken. As this place face extreme climatic conditions. The summers are very harsh and the maximum temperature goes from 45 degrees to 50 degrees Celsius. Therefore the best time to visit is winters i.e. October to March. The district Vaishali holds many spiritual emotions for the different religions.

The Pillars of Ashoka

The nearest Airport to Vesali is Jay Prakash Narayan International Airport, Patna. The distance is about 32 km and it takes approximately 1.5-2 hrs to reach. The flight connects the major cities of India I.e. Hyderabad, Chennai, Goa, Ranchi. The average fare for the flights is 2000- 5000. The bus facility and the taxi is also available from the airport which runs by the local rates. If you wish to travel by railways, then the nearest station is Hajipur Junction. The distance between the junction and the city is 44 km and takes about 2-3 hrs to reach. The distance is conveniently traveled by bus or taxi. The junction is well connected with other cities like Chhapra, Muzaffarpur, Kolkata, Delhi, Chennai, and Mumbai. The average fare is about 2000-3500.

Also read about the beautiful Nalanda in Bihar https://indiain360.com/nalanda/

One thought on “Vaishali, India”