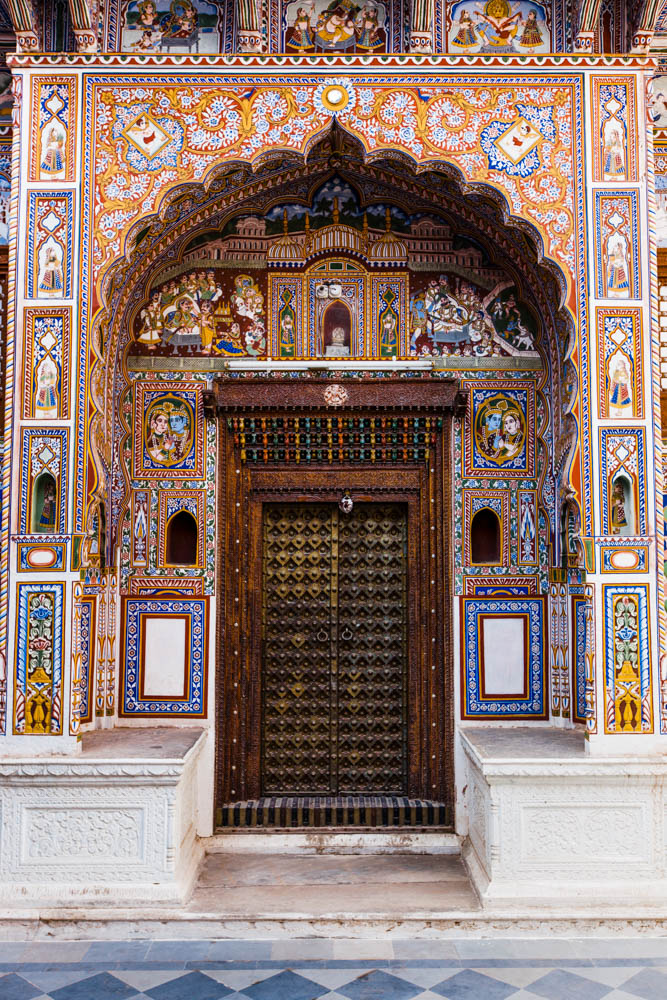 Shekhawati is a semi-arid trip packed with open-air galleries, enchanting palaces, and forts. This place was acknowledged as Rajasthan Open Art Gallery with the largest number of frescoes in the world.” Shekhawati has a history similar to the history of Nawalgarh, where men from the Marwari have been to cities such as Bombay and Calcutta in search of jobs, and the time that they have found success and their businesses have flourished, that exactly when the plumage has emanated. This is one of the most famous tourist places in Rajasthan.

How to reach Shekhawati

By air: Jaipur is about 150 km from the closest airport. The airport of Jaipur is connected to Mumbai and Delhi metro towns. From Delhi International Airport, international travelers can take connecting flights. Taxis can be rented to Shekhawati from Jaipur airport.
By train: Delhi and Jaipur trains are available from everywhere. Jaipur or Bikaner makes access to reach Shekhawati very easily. On the road to Jaipur-Bikaner are Sikar and Fatehpur. Churu is on a train from Delhi to Bikaner, while Jaipur and Delhi are on Sicar, Nawalgarh, and Jhunjhunu.
By Bus: From Delhi to Shekhawati there are direct buses. Busses are from ISBT Kashmiri Gate), Sarai Kale Khan, or Dhaula Kuan in Delhi. The bus service to Shekhawati is open. The other cities are linked to all of Shekhawati (Sikar, Churu, and Jhunjhunu). Bikaner and other cities in Rajasthan are also connected by buses.

Although the climate is in severe conditions in Shekhawati you can visit the city all year round. The summer is warm, with temperatures of up to 40 ° C. With a mean temperature of 26 ° C in the daylight, the winters are comparatively colder and the nights cool as 9 ° C in the evening. The most suitable time to visit this location is between November and March.

Famous places to visit in Shekhawati

Alsisar is a small town known as the half-desert and the half-Greenland in the northwest region of Jhunjhunu. Finding its name on the list is one of the most popular tourist places in Shekhawati. Alsisar contains numerous historic monuments and palaces, which display the brightness of old Rajasthani.
Best time: Between October and May, the best time to come here is when the weather is cold.
Attractions: Morarka Haveli, Sethani Ka Johara, the Fun zone of KUKU, Aath Havelis, Dr. Ramnath A.

Mandawa
Mandawa is a town in Rajasthan state and is situated in the area of Shekhawati. The capital of Rajasthan, Jaipur, lies about 190 km away and the national capital, New Delhi, lies approximately 240 km away. In the late 18th and early 19th centuries the city was largely inhabited by merchants, and now because of its beautiful past has been turned into a tourist attraction. The city of Mandawa is also known as the open-air art gallery due to the numerous historical buildings in the city. These famous Havelis are the city key attractions, most of them now restored to Heritage Hotels.

Nawalgarh
Nawalgarh is a small town that is also known as the estate of the Havelis. It is important to see the numerous Shekhawati frescoes and artworks adorning the walls of the city of Nawalgarh. While Nawalgarh City’s natural beauty is very sparse, it is a city full of natural beauty, both with its picturesque buildings and structures and colorful work of art that lies in its vicinity. In its heart, Nawalgarh is, of course, has many beautiful Havelis, and buildings that have been designed with attention and imagination to represent the artistic nature of its people. In Jhunjhunu, the small city of Dundlod is renowned for offering horse riding trails to the Marwari people. The town is filled with picturesque routes that allow you to enjoy the action and include many resorts where you can stop on your way. Also, many small shops selling homemade snacks and pickles attracting many visitors.
Perfect Times: The best time to schedule your excursion here are the winter months when you can have fun free sightseeing tours from October to April.
Attractions: Fort Dundlod, Temple Satyanarayan, Jagathia Haveli, Goenka Haveli Tuganran, Fort Badalgarh.
Fatehpur
Fatehpur is a small town and the host of many great wonders in the Sikar district of Rajasthan. Renowned for its intrinsic architecture, this location attracts visitors from around the world to visit. Finding its name in some of the best tourist places in Shekhawati, Fatehpur is home to many lovely Havelis showcasing wonders of architecture and ancient temples rooted in culture and heritage.

Best time for visiting Fatehpur: the best time for visiting Fatehpur is during Shivaratri when there are fair carnival temples and in winter, from October to May.
What you see: Dholi Sati Dadi Mandir, Balaji Dham, Nadine Cultural Centers, Jagannath Singhania Haveli, Balaji, Balaji Dham.
Horseback Riding, Shekhawati
You can get a wonderful experience in Shekhawati as you can get a chance to do horse riding. You can fly through Shekhavati, which still reverberates with the ancient culture of Rajasthan, and takes you on a horseback through the glorious history of the merchants of the Silk Road. You can know about Rajasthan life, culture, and Havelis on the back of exclusive Marwadi horses.