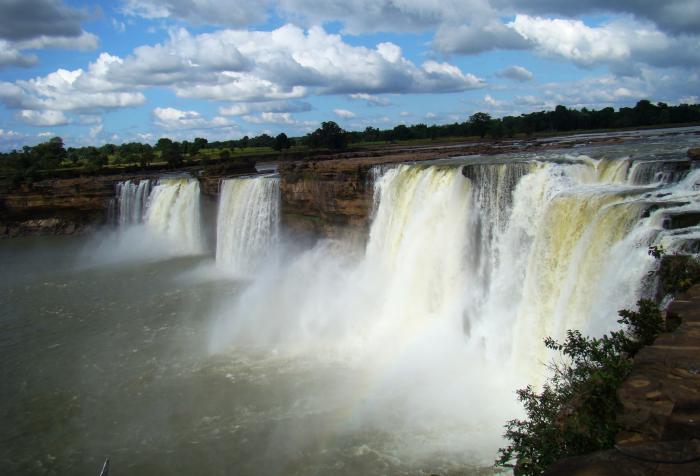 Chitrakote waterfall is a natural waterfall, located in Jagdalpur city in Bastar district of Indian state Chhattisgarh. The fall is located on Indravati River, the river start off from Kalahandi district of Orissa and makes a fall at Chitrakote and enters in Telangana, later emerges into Godavari at Bhadrakali. This cascade is often compared to Niagara Falls of United States because of its widespread horseshoe shaped and has been given the name of “the small Niagara Falls” or “Niagara Falls of India”.

It has been said that, the ideal time to visit any water reservoirs is in Monsoons, but the fluctuating weather causes uneasiness for visitors. You can plan a trip around late monsoons or early winters; that is from last week of September to Early March. The weather of late monsoons and winters is quite cold and pleasant, comfortable for photographers to take pictures of white and clear waterfalls followed by rainbows created by sun rays reflecting on mist from the waterfall. The falls seems more artistic during sunset all throughout the year.

Local paddle boat facilities are available below and under the falls and many locals are involved in fishing in low-flow area.

On the banks of pond, below the falls there is a small hut made up of straws which have Shiva and his son Ganesha photo. Devotees bath in calmer parts of the pond.

Since the water fall is 38kms from Jagdalpur city, first you have to get to the city through National Highway 30 and 65 that serve the city with the private buses to Andhra Pradesh, Nagpur, Kolkata and Hyderabad etc. From Jagdalpur there are 4-5 state buses that take you to Chitrakote waterfall and usually take 2 hours to reach there.

Jagdalpur railway junction has very few passenger trains. The railway line of Jagdalpur is not very accessible and is mostly avoided by tourists.

Jagdalpur airport is known as Maa Danteshwari airport, the airport serves Raipur, Hyderabad and Jagdalpur through special air-crafts. The nearest airport is Raipur airport and it takes 5 hours you to reach Chitrakote falls from there.