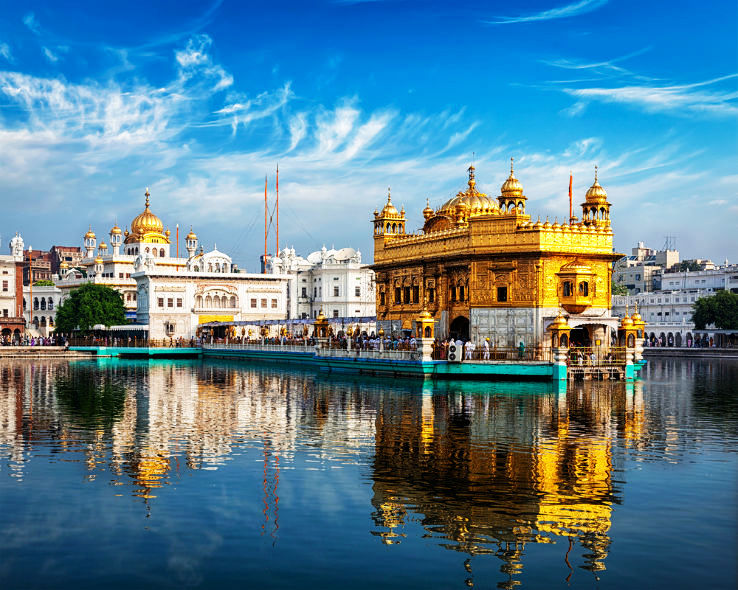 The heroic essence of a Punjab is depicted in the majestic Golden Temple in Amritsar. A day of spiritual prayers from the Gurudwaras begins in this peaceful city. The original name came from the old lake and then of the temple complex and later of the nearby city, which means ‘ambrosial nectar pool.’ Amritsar is the Sikh religion’s spiritual and cultural hub. With the finest wine, clothes, and merry-making, the Amritsar festival brings out Amritsar’s glorious face. The place is also remembered for the massacre in Jallianwala Bagh near Wagah Border. The satiating food and the huge crowds of legendary Punjabi hospitality make tourists even more enchanting. Amritsar sawed the most serious circumstances, ranging from Operation Blue Star in the Golden Temple to the Jallianwala Bagh massacre disaster, and came through test times like a phoenix. Today, Amritsar is a prosperous town with successful tourism and trade and a lot of tourists visit this place every year.

How to reach Amritsar

By Air: The Amritsar International Airport is about 11 km from the city center, and has over 160 flights both domestic and international. Delhi, Mumbai, Bangalore, Chandigarh, London, Doha, Dubai, and Kuala Lumpur are available regular direct flights.

By Road: Amritsar is well-connected by road with its location on National Highway through regular bus services to and from Ambala, Patiala, Delhi, Chandigarh, and Jammu, including public and private bus services. You may take rickshaws, car rickshaws, taxis, or buses for transportation within the city.

By Rail: The Amritsar Railway Station links Delhi, Bombay, Hyderabad, Agra, Ahmadabad, Kolkata, and Chandigarh to almost all major Indian cities. It takes about 6 hours to travel by train from Delhi to Amritsar.

Between November and March Amritsar is the best time to travel, as there is a reasonably nice and ideal time to visit the Golden Temple. The temperature, however, can often exceed 4 ° Celsius freezing.

The Wagah Border is India-Pakistan only road border. Here every night, the Beat Retreat ceremony marks the closure of both countries’ boundaries and the reduction of flags by both the military. The Wagah Border is a major crossing between India and Pakistan and is situated near the Attari Village. It’s known for its spirited ‘Flag Lowering’ ceremony, which is this place’s main attraction. This ceremony is also recognized internationally as Beating Retreat. The Wagah Border Parade is one of the most exciting events for tourists in Amritsar.

Akal Takht Sahib is one of the Sikhs’ five takes found in the Harmandir Sahib or Golden Temple. Akal Takht translates literally into the “temporal’s throne.” It is a place where general meetings were held and many important decisions were made. The Akal Takht in Amritsar is the oldest of the 5 takes.

It is one of the state’s most important historical sites, regarded as the very essence of Punjab. The Gobindgarh Fort was originally constructed by Gujar Singh over a 43-acre area, and Maharaja Ranjit Singh completed its final construction. It was built to defend Amritsar from invasion and, hence, it was referred to as the ‘Guard of Amritsar Holy City.’ It is a famous place for tourist attraction.

Taran Tarn Sahib in Amritsar was established by Sri Guru Arjan Dev Ji. Saint Gurudwara has an architected Mughal style and many people are visited. Kirtan occurs every day from early morning until the evening in Gurudwara. The Gurudwara interiors are decorated with glass pieces, paintings, and gold sheets cover the outside.

The Durga temple is a big Hindu temple situated in the Punjab district of Amritsar and is also known as the Laxmi Narayan temple. Hence, along with the idols of the deity Laxmi and Lord Vishnu, the idol of the deity Durga has its names derived from the Hindu Goddess, Durga, and the idol of the goddess Durga is also worshipped.