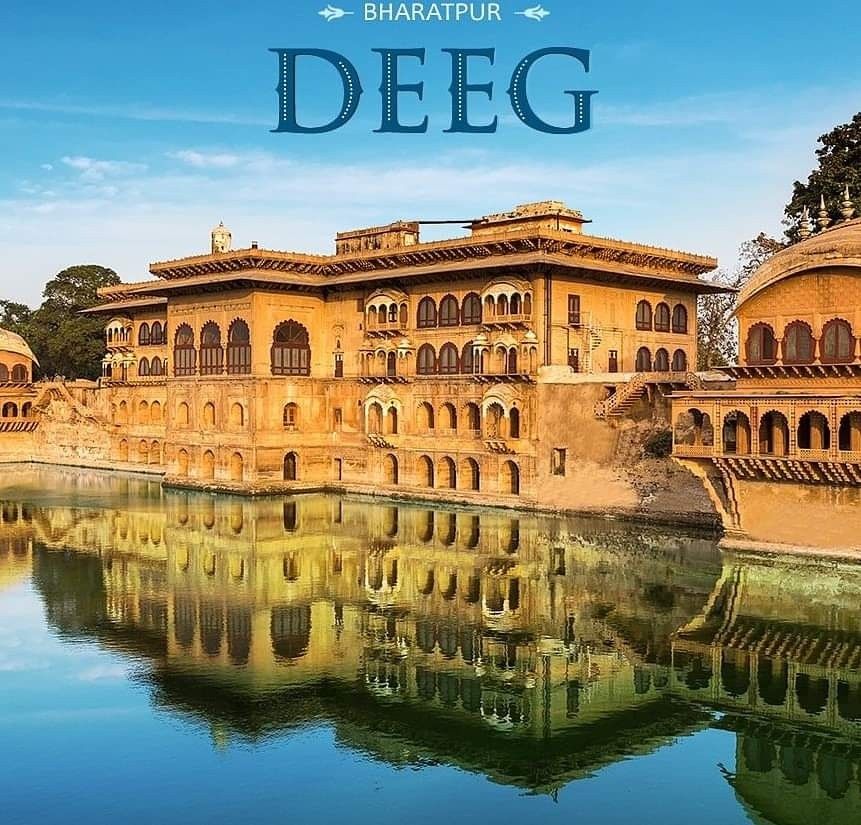 Deeg is a small town in the state of Rajasthan, situated near the town of Bharatpur. The town is famous because of its elegant palaces, its exquisite fortifications, and its desi bazaars. The famous Bharatpur Bird Sanctuary is a must-visit and is also not far from here. In search of a break from their daily life, the majority of travelers are on holiday over here, some seek a cultural change. Far from the massive crowd, it is a little quiet village with unbeatable scenery and the chance to see nature spectacular sights. Bharatpur Bird Sanctuary, where uncommon species of birds can be found, is a few kilometers away. You can spend a day in the countryside, live the way to wish and enjoy in Deeg.

How to reach Deeg

Deeg is a popular tourist destination and you can reach here directly. Agra (74 km) and Delhi (129 km) are the nearest airports to the city. The Deeg junction offers very few trains. The Bharatpur junction can be easily accessed. Busses for Bharatpur or Mathura are available for Deeg. From Bharatpur to Deeg there are regular local bus services.

Deeg Palace was built in 1772 as a luxury summer resort for rulers of the State of Bharatpur. The palazzo is 32 km from Bharatpur, Rajasthan, India. Until the early 1970s, the building was in heavy use. Before they moved to Bharatpur, Deeg was the Jat king’s capital. In 1721 a palace was built by Badan Singh who came onto the throne. Deeg was met with repeated attacks by attackers because of its strategic position and its proximity to Agra. The building of a fortress around the palace was started around 1730 by his son Prince Suraj Mal. The fort had broad walls and a deep sepulcher to keep raiders away. The best time to visit the place is from October and November.

Famous places to visit in Deeg

Deeg has some late 17th and early 18th centuries Haveli. Mughal architecture and design influenced tremendously. Most are made of marble and are constructed in common style. The Jaat Empire used all these Bhawan’s when they controlled the throne. These old buildings have been a testament to many important historical decisions, some of which were bloodshed, while others were silent monitors of the royal novelty. The most famous ones in Deeg are Nand Bhawan, Kesav Bhawan, Hardev Bhawan, Kishan Bhawan, and Suraj Bhawan.

With Roop Sagar on one side flowing and this massive, gorgeous fort on the high coast, Deeg Fort is the favorite tourist destination. This fort was built here in 1772 because of its proximity to Agra. This fort was built here. The fortress was constructed around the palace by the Raja Suraj Mal in 1730 when huge walls were raised and the deep moat was planned to keep the invaders away from the castle. The fort appears to have an immense impact on the concept and design of the Mughal Charbagh, its design is close to that of four corners of the lawn and a path in the middle. Although the fort on one side has Roop Sagar, on the other, Gobind Sagar helps both together to lower the fort temperature.+ photos

Bharatpur is located at approximately 38 km from Mathura in Braj, Rajasthan State area. The Keoladeo national park, which habitats more than 370 animal species and birds, is known for its wildlife. It is one of the most common birds that eat and breed. This national park, known locally as Ghana, has been the Siberian cranes’ winter home; an extinct and threatened species (today considered an endangered bird). Bharatpur is drenched with its history and it has miles of folklore.

Deeg Palace was built in 1772 as a luxury summer resort for rulers of the State of Bharatpur. The palazzo is 32 km from Bharatpur, Rajasthan, India. Until the early 1970s, the building was in heavy use. Before they moved to Bharatpur, Deeg was the Jat king’s capital. Deeg was met with repeated attacks by attackers because of its strategic position and its proximity to Agra. The building of a fortress around the palace was started around 1730 by his son Prince Suraj Mal. The fort had large raiding walls and a deep moat.

Established in 1760 and one of the most popular tourist attractions in Deeg, Gopal Bhawan, Bharatpur. This too has a lovely laid lawn. A raised terrace was built in front of the main garden. On the high pedestal in the form of a swing, a marble arch was built. For kings and queens, it was the place to restThe banquet hall is another draw in the Bhavan. The hall is surrounded by two lines of pillars, souvenirs, curiosities, and victorian paintings. A second room in the building has a black-colored marble bed. This is a very beautiful place to visit.

Rajasthan is the land of some most beautiful places in India, Deeg is among all. If you like our blog please share it further with your friends & family. Your love & support is all we need.