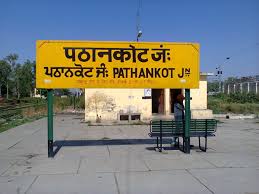 Pathankot is a town situated on the west banks of Kangra and Dalhousie in Punjab, bordering Pakistan. Pathankot is situated in the Jammu & Kashmir, Punjab, and Himachal Pradesh meeting point, passing by the Chakki River. It has a calm green beauty and a rich historical history. Pathankot is linked to most of India’s main train stations and thus is an important place in the surroundings of Dalhousie, Dharamsala, Kangra, Manali, and Jammu and Kashmir. For several centuries Pathankot has been known to the Loi and shawl weaving industries. The defense forces base of the Indian Army and Indian Air Force that is currently in Pathankot. Pathankot also offers some lovely religious sites such as the Temple of Mukteschwar, the Temple of Kathgarh, the Temple of Nagini, and the Fort of Shahpurkandi.

How to reach Pathankot

By Air: The city has its airport, which is also known as the military airport, called Pathankot airport. It is used primarily by the armed forces. The airport of Pathankot is well connected to major cities such as Delhi, Kullu, and Chandigarh. Pathankot Airport is the closest airport.

By Road: The bus service is easy to get to Pathankot as it is very well connected from the capital of Delhi and connected to the state road transport company Punjab (PSRTC).

The best time to visit Pathankot is from October to April. You can come to Pathankot anytime if you want to visit other places because the weather in the summer is not too hot.

Famous places to visit in Pathankot

Ranjit Sagar Dam is ideal for enjoying a day with family or friends as it offers many picnic spots in the vicinity of Pathankot to relax and relax. The Ranjit Sagar Dam is also referred to as the Thien Dam and is built on the Ravi River.

This quaint temple is situated near Pathankot, along Shahpur Kandi Dam Road, and houses Lord Shiva’s shrine. It is also known as Mukesaran Mandir and is one of India’s many Shiva Temples. This temple is considered the most religious places of Pathankot and stands high above a hill and represents the beauty and charm it exudes as an important cultural landmark for the people living in and around Pathankot. Many devotees come here from all over the world and it is a vital spiritual hub. This holiest temple is also home to deities such as Lord Ganesha, Lord Brahma, Lord Vishnu, Lord Hanuman, and the goddess Parvati from the Hindu religion.

Shahpurkandi Fort is one of the best Pathankot tourist sites on the shores of a Ravy River in the picturesque foothills of the Himalayas. It was built in the 16th century and stands high among Pathankot’s scenic beauty. A part of the fort is now used as a tourist resting place and offers spectacular views of the town of Pathankot.

This temple is a religious landmark and one of the most popular tourist spots in Pathankot, about 16 km from the town, dedicated to snakes goddess. This ancient temple, one of the holy temples in Punjab, organizes every Sabbath of August a massive fair which attracts numerous pilgrims and tourists from around the world. Another special feature of this temple is that water comes from the place where the Nagini-Mata idol is installed.