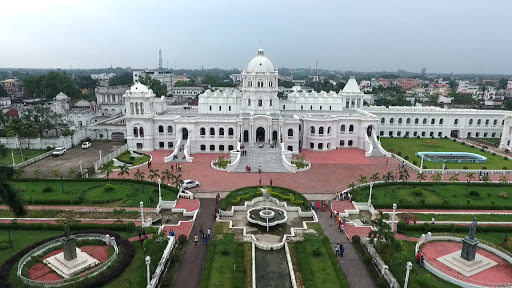 Ujjayanta Palace is a royal former palace situated in the heart of the city Agartala, capital of Tripura. This palace was constructed by Maharaja Radha Kishore Manikya Debbarma, King of Manikya Dynasty of Tripura. The palace has two lakes on the front with a garden on two sides. The palace although has been renovated into the Tripura state museum by the government of Tripura.

Ujjayanta Palace, Agartala is almost 12kms away from the only airport that is Maharaja Bir Bikram airport and 9kms from the Agartala railway station.

One has to buy tickets which are only INR 20 for each person to enter the museum. The whole area is surrounded by small plants and trees. Varieties of flowers are present during the winter and spring season. Two lakes create a cool atmosphere around the palace. Inspired from the architectures of the Mughal Dynasty, the main palace has three large domes. The palace had one Darbar hall, throne room, reception hall, library with several other halls.A Chinese room was also made after a while. But after it got renovated into a museum the rooms are indistinguishable.

The museum has 22 display galleries. There are a variety of archaeological antiquities, stone sculptures, jewelry, ancient coins, terracotta plaques, ornaments, and descriptions of various tribes of Tripura including the northeast. There are a lot of oil paintings which include paintings of all the Kings(Maharaja) of Tripura. A small part of the museum also includes royal moments related to Rabindranath Tagore, a prominent personality of Bengal. The name “Ujjayanta palace” was given by Rabindranath Tagore himself. In the evening, the palace is decorated with lights which adds more charm to the elegant view of the place.