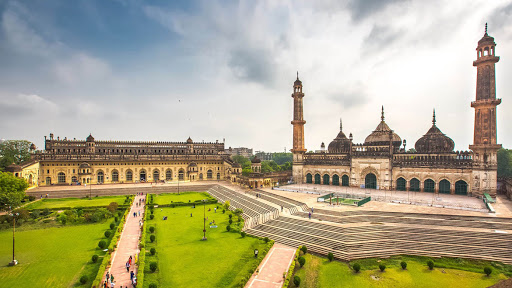 Jama Masjid was built during the ruling period of Mughal emperor Mohammad Shah. The masjid is built on the grave of 73 martyrs. Its dome and minarets are made up of pure gold, making it only one highest gold mosque in Asia.

The part of Qila for we see today is the remains because; Battle of Aligarh was fought here between Marathas and British on 1 sept, 1803. Now, the fort is protected by government under   Archeological Survey of India.

This place was the residential area of Sir Syed, after his death the house is converted into AMU or Mohammaden Anglo-Oriental College. The idea behind this conversion was to embrace the contribution of him in the field of education.

The temple is dedicated to Lord Shiva, the shiva statue is very small as its invisible that’s why it is called as invisible shiva linga. The temple is very old and is famous for its architecture.

Sky High is the only internationally recognized sky-diving region in India. The authorities provide a certificate after successfully completion of your dive. All the safety and preventive measures are taken by the authorities for participants.

The park is also known as Rajkeey Uddhan Jawahar Park, the place is very popular among locals for walking and jogging and most attractive point of this park are peacocks.

You can easily commute by road from Aligarh to Rajasthan, Bhopal, and Uttar Pradesh also by state and private run buses.

From the Aligarh Junction approx 136 trains passes every day and its railway line lies on Delhi-Kolkata network so it connects to major cities of India like New Delhi, Kolkata, Orissa, Jharkhand, Bihar and most of Uttar Pradesh.

The nearest domestic airport is Kheria airport in Agra at 80kms and nearest international airport is Indira Gandhi International Airport in Delhi at 140kms. You can board on bus, taxi or cab from airport to the main city area.