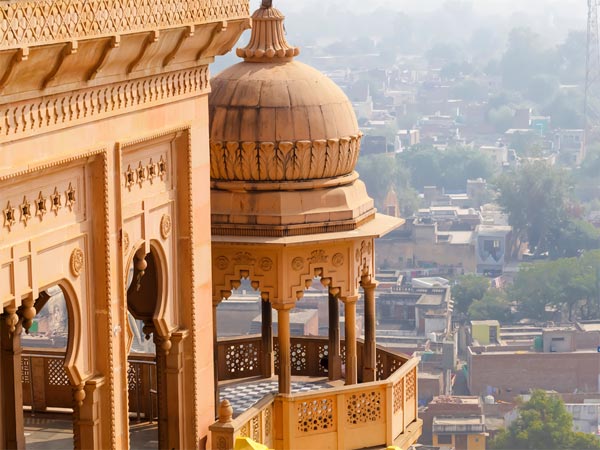 Barsana is a small town in Braj region of Mathura district in Uttar Pradesh with the elevation of 597ft or 182m. The ancient name of the town is Brahmasarana or Vrishabhanupur and is the birth place of Krishna’s beloved Radha Rani and is a significant pilgrimage site among Hindus.

The town is situated on 2 hills known as Brahma Hill and Vishnu Hill. These hills have 4 peaks: Bhanugarh, Maangarh, Daangarha and Vilasgarh in which former 3 are believed to lies on head of Lord Brahma. The town is famous for the Indian festival of colors called Holi. Here Holi is played between the residents of Nandgaon ( a nearby small village) and Barsana, in here they used sticks and a shield, where women uses sticks to hit the men and men protect themselves with the shield.

The amount of time you can spend here is maximum 2 days. In winters between Novembers to January are considered ideal time to visit the place for sight-seeing. But if you are someone who is interested in seeing the cultural side of the town, then the ideal time is in festive season: Ramnavmi and Lathmaar Holi. At this time, the city sees a vast majority of tourists and devotees from all over the place.

Barsana is well connected to Delhi, Agra and Matura by road by State and a few private buses. The road trip to Barsana from other parts of India is not very familiar by tourists.

There are 2 railway stations that are approachable from Barsana: Kosi Kalan at 10kms away from the city and Mathura Cantt at 50kms from the town.  Major of the train halts, merged at Mathura Cantt station from almost possible part of the country. From station you can hire taxi or cab to your destination. In fact, to reach Bansara, railway is the most popular route among tourists as it is hassle –free.

The nearest international airport is Indira Gandhi International Airport in Delhi at 112kms approx from the main city area. The Delhi airport is connected to almost every part of the country.