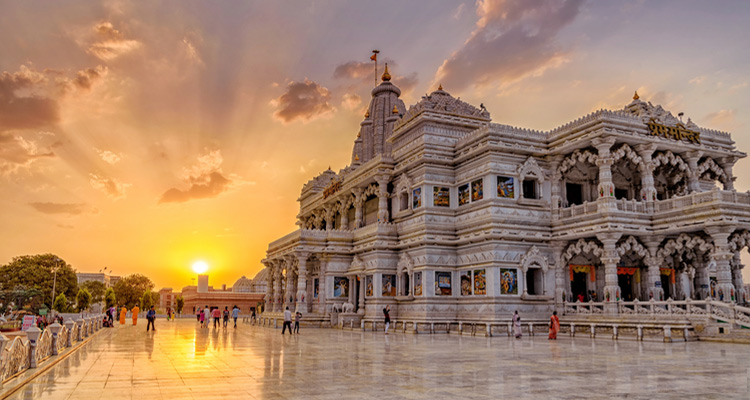 Vrindavan is a historical religious city in Mathura district of Indian state Uttar Pradesh located in the Braj Bhoomi region that’s why it is often called as Brindavan.  It is believed that Lord Krishna has spent most of his childhood days here. The entire city is dedicated to the temples of Radha and Krishna, but every temple is unique in architecture and has its own history. Vrindavan is a major pilgrimage site for Vaishnavs and Hindus. Apart from the temples, the place offers rich heritage, harmonious culture and traditions for the tourists. The place is also known as “City of Windows” because many of the windows from West Bengal, Orissa and Assam come here and prays to the power. The major festivals celebrated in the city Janmasthami, Govardhan Pooja and Holi.

As the city is almost very close to Agra, therefore, it is crowded throughout the year but the months of September to March are preferred by many of the tourists as the temperature remains comfortable; between 9 degrees to 15 degrees Celsius.

Vrindavan is a city in district Mathura; there are plenty of private and state owned buses from Agra, Delhi, Jaipur, Haridwar to Mathura. You have to get down the Chatikara road, and them take a cab or auto-rickshaw to Vrindavan.

The closest train station is Mathura which is about 14kms away from Vrindavan city. The distance is easily covered by pre-booked cabs or local autos. The Mathura station witness trains from Delhi, Jaipur, Mumbai, Goa, Ratlam and Kolkata. The ticket price varies according to the festive season.

The metropolis doesn’t have its own airport. The nearest domestic airport is Kheria Airport in Agra (54kms) and the international airport is Indira Gandhi International Airport in Delhi (128kms). There is bus facility available from Agra airport to Vrindavan, otherwise cabs and autos are always comes in hand.