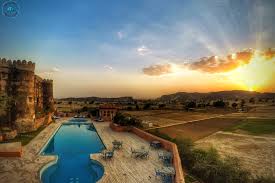 One of Alwar’s few heritage hotels since the 14th century is the Hill Fort Kesroli. This resort is a magnificent destination for sunset exploring Neemrana heritage hotels every day for 700 years in the area of Alwar. For those seeking a relaxing weekend trip from Delhi, Hill Fort Kesroli is a great holiday choice. This beautiful place was built in the fourteenth century. The Hill Fort Kesroli of Neemrana is one of the most spectacular old palaces of historical heritage. This stronghold is surrounded by fields. The hotel has a large pool and a lovely garden. The rooms are decorated in a traditional Rajasthani style which gives it a royal feel. This is a must-visit place if you are on a Rajasthan tour.

By Rail: Alwar which is about 12 kilometers from Kesroli, is the nearest railway station. You will need to take a bus from here to get to Kesroli.

By Road: It takes around 2 to 3 hours by car or taxi and the nearest Delhi-Sohna-Alwar Road being Sawai Madhopur.

By Air: The nearest airport is Indira Gandhi International Airport, New Delhi, 155 km away from Kesroli. Taxis are offered at a fair price from the airport to Kesroli. This airport is well connected through frequent flights with major Indian destinations including Kolkata, Bengaluru, Mumbai, and Chennai.

The months of November-February are the best time to visit the place since the winter months are very nice in this region. Summers can get very hot here because there is a very high temperature. The monsoon offers relief and decreases in temperature.

The Hill Fort Kesroli is a fort in Alwar, Rajasthan, dated from the 14th century. It is the descendant of Lord Krishna, founded 6 hundred years ago by the Yaduvanshi Rajputs. They converted to Islam in the middle of the 14th century and became known as Khanzadas. The seven rotating forts have changed hands several times over the years. The Mughals, Jats defeated it and in 1775 the Rajputs eventually took it over. This resort is a very beautiful place to visit.

Sariska Tiger Reserve is one of the most populated national parks in Rajasthan, in the Alwar district in Rajasthan. The total area of coverage is approximately 866 km. A variety of wildlife such as the Royal Bengal Tiger, wild boar, langur, caracal, sambhar, and Chital is found here in the national park. Furthermore, the Garh Raior Temple and the Neelkanth Templo are also part of this national park. If you love animals then you must visit here.

Siliserh Lake Palace was constructed in 1845 by Maharaja Vinay Singh for his wife and was 13 kilometers south-west of Alwar. This Siliserh Lake is now a hotel and a great stop for people visiting Sariska Tiger Reserve.

Kalakand Market itself is one of the famous sweets from this market in the nearby city of Alwar. On Kalakand Lane, the Kalakand is sold itself from a store. Besides sweets, a range of local products, crafts, and daily goods are available on the market. Apart from on Tuesdays, the market is open all week long and is a famous place among tourists that are fascinated by Indian culture.

This beautiful fort in the foothills of Aravalli was built in the 18th century and is situated directly below Bala Quila. The fort is a great synthesis of the architecture of Mughal and Rajput. In 1815 Maharaja Vinay Singh constructed a man-made lake in the vicinity of the town palace. The Vinay Vilas Mahal, which is the representative of the pride and honor of Rajput Kingdoms, is a strongly shaped door pavilion.